You will all know something about NYC and probably something about the actor Kevin Kline, but maybe know little – if anything – about Patricia Beard.  She is an internationally-acclaimed American author – perhaps best-known for her two books about Wall Street – Blue Blood and Mutiny – the Fight for the Soul of Morgan Stanley and After the Ball.

She lives in upstate New York with her husband, and they were on their way back there from London in November 2007, on the same flight as me – and not just the same flight, but in the adjacent seats to me.  They were reading through and commenting on some book reviews, and something she said triggered a comment from me (without being seen as an eavesdropper).  She introduced herself as the published author and I confessed that I didn’t know of her work.  She minded not at all, and my abiding memory of her at that moment was of a thoughtful, interested, and most interesting lady.  Delightful company.  Her husband was equally delightful, and we took a standup break talking ‘soccer’ for a good 20 minutes.

We said goodbye in the security queue at JFK airport, with Mr Beard wishing Sue good luck in her endeavours.

Sue was not on the ‘plane with me, as she was running the New York Marathon that day, and I was due to join her, as pre-arranged, in a bar on Broadway that evening.  If that ain’t romantic, what is!!

I took the train from the airport into central NY, alighting at 46th Street, coming up to street-level, and looking up to see some real skyscrapers.  Wow, just wow!!!  My lodgings (unlike Sue’s swanky hotel) were a 5 minute walk from there.  I had time to check in, do a quick change, let Sue know that I was in town, and walk back onto Broadway to locate the pre-arranged bar.  En route, I passed a theatre at which Kevin Kline was taking the lead role.  I stopped to read the billboard, and who should walk past me at that moment, but…..Kevin Kline.  I said ‘Hi’ (as you do), and he wished me ‘Good evening’.  So, the one and only time I met KK, was one early November late afternoon in 2007, in NYC.

The reason that Sue was staying in a swanky hotel, was because she had gone out there with a group of runners organised by 209 Events, a few days in advance of the run, to acclimatise.  I followed on run day itself, with a view to spending a few days seeing the sights together.

Walking into a bar on Broadway, and seeing Sue looking animated with a glass of Guinness in her hand, and that smile as she saw me – well, just one wonderful and unforgettable moment.

We walked and walked for the next few days, the length and breadth of Manhattan, taking in Central Park, Bleecker Street, Ground Zero, and climbing (via the high-speed elevator, to the ‘Top of the Rock” – the roof of the Rockefeller Center.  We ate American portions.  It was balmy late autumn weather – we were truly blessed.

Sue ran the marathon in 4 hours 54 minutes, thereby getting her name in the New York Times for her sub-5 hours finish.

A great experience all round, and a visit which we must repeat at some point. 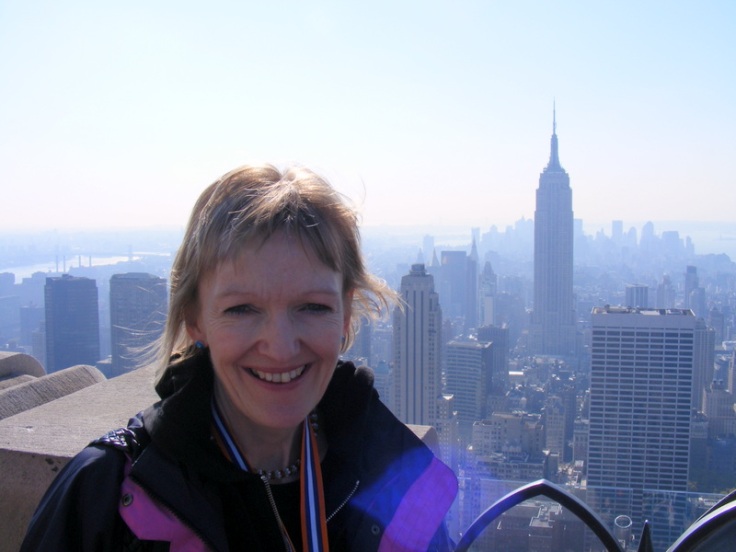 And with daughter-in-law Nataly, who had met Sue at the finish line… 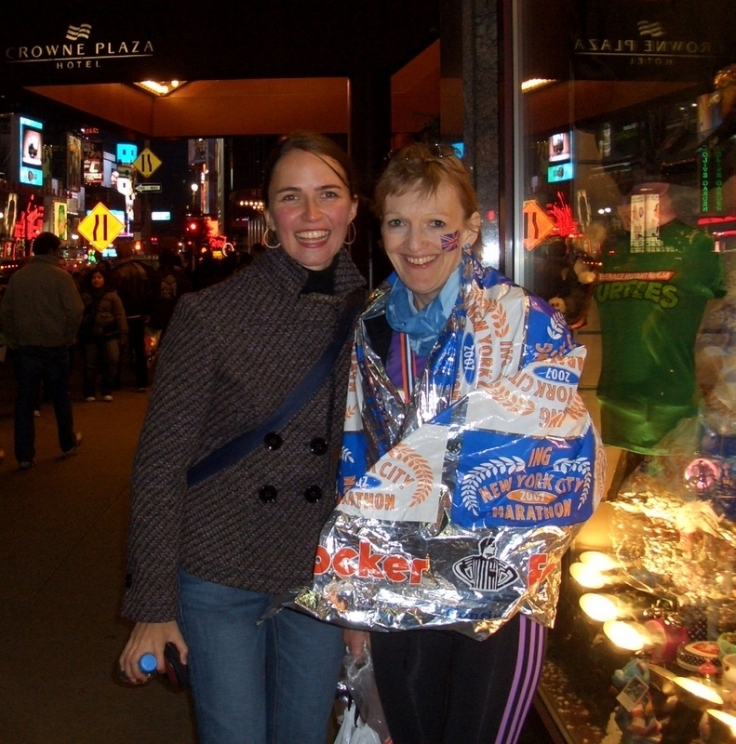 Retired from normal economic activity, the pen still moves across the paper...